On day 3 we relocated our center of activities to Florence.

The day started with driving to Florence. Since we didn’t eat breakfast before departing the hotel we decided Roni and Or will chose the place we’ll have breakfast. They’ve selected a stop at one of the petrol stations along the way and once we got there we decided on a breakfast.

Once we got hold of a huge pack of Pringles I felt better immediately… Since Karen did all the driving up to this point I decided that today was my day. We started driving on the Italian toll roads enjoying both the views of Tuscany and the excellent behavior of the traffic and the drivers. 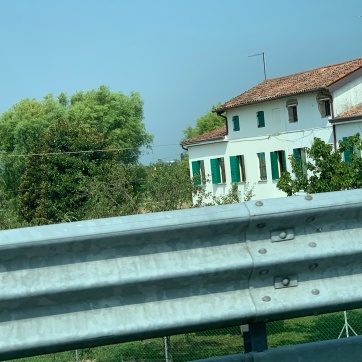 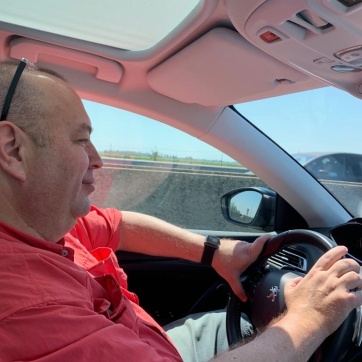 After driving for quite a while and before entering Florence itself  we drove to the agreed rendezvous point which was the Primark shop at the I Gigli shopping mall located at Campi Bisenzio.

As we entered the mall I immediately fixated on the huge Apple shop in the mall.

While the guys went shopping at the Primark shop I did an extensive tour of the Apple shop, verified yest again that everything works as I knew it does, read my emails and gauged some of the prices. After an hour or so the guys were done with their shopping and we went to the food court to eat.

After we finished eating we drove to the hotel which I knew was located at the outskirts of Florence. After driving through various bi directional, extremely narrow, bi-directional streets we arrived at an extremely laid back boutique hotel which was a renovated Tuscany farm. Karen has made a great choice booking us here. We and Roni and Or had two rooms at the uppermost story and Lee and Jonny had a huge room with a terrace facing the internal yard.

Here are pictures of our room and the view from it… 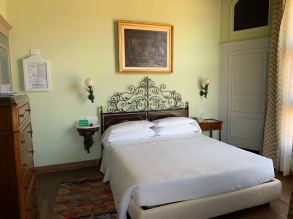 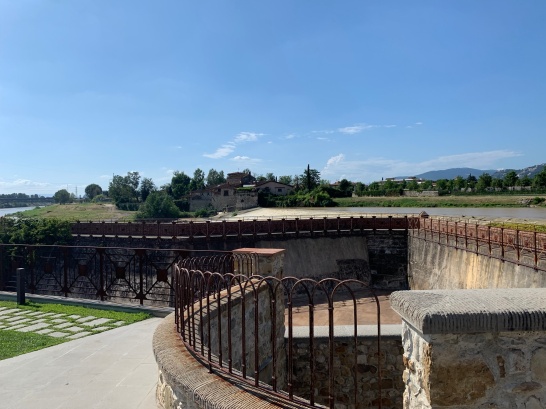 The reception clerk told us there was a shuttle at certain times from the hotel to Florence and as the time of departure of the next one was close, we finished unpacking quickly and took it to see the magic of Florence.

After arriving to Florence we disembarked near a hotel close to the river and continued by foot. The first site we saw was the Florence public library. 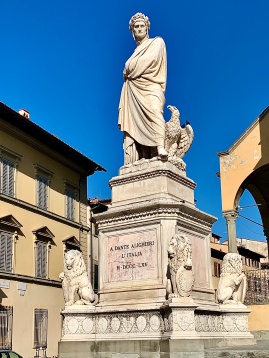 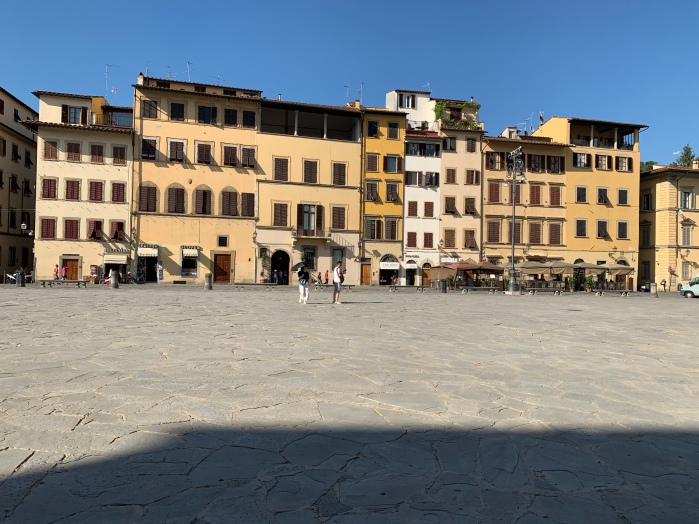 Following a short walk via the narrow streets of Florence we’ve arrived at the famous fountain of Neptune with the replica of Michelangelo’s David standing next to it. While walking we had to dodge the African vagabonds trying to “sell” us stuff we don’t need… The guy who got hold of me gave me an arm band for all of us, a green statue of something unfathomable, showed me a picture of a white baby telling me he was a new father. I didn’t know ho to get rid of him. Eventually we caught up with Karen and as I didn’t carry any cash I asked Karen to give him “something”…

After that we went through the streets of Florence observing the huge crowds and the pavement artist making magnificent chalk drawings on the pavement. 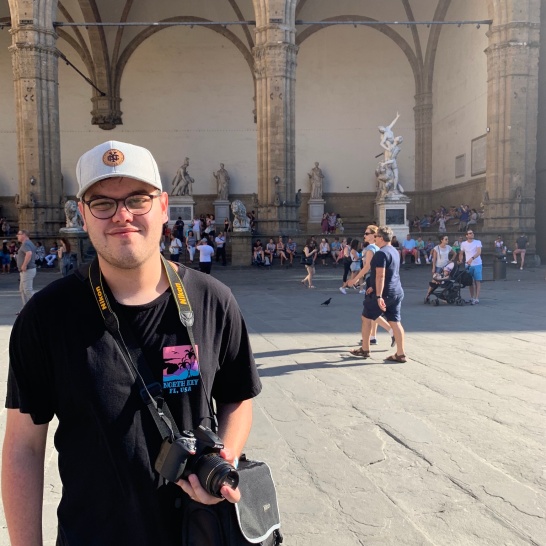 Eventually we arrived at the Florence Apple shop 🙂

As always I went it, this time accompanied by Or to learn yet again that this shop has all the usual Apple assortment. But the restored front and the facility were ever so nice.

Then we went stalling again until we reached the Brunelleschi Cupola. Its hard to imagine how this magnificent structure and the dome were erected some 600 years ago without heavy machinery!!!

At the Duomo Jonny was convinced to sit for a caricature by a local strret artist who captured him extremely well! 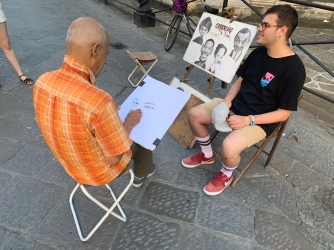 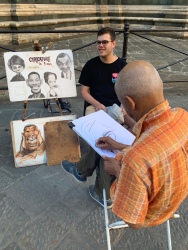 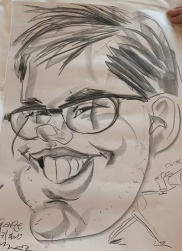 After this walk when I really, really couldn’t walk any more and as the time for the returning shuttle was coming close Karen and I decided to walk (if you can call it that 🙂 ) to the shuttle via the river.

We departed and the kids who stayed behind for some dinner. 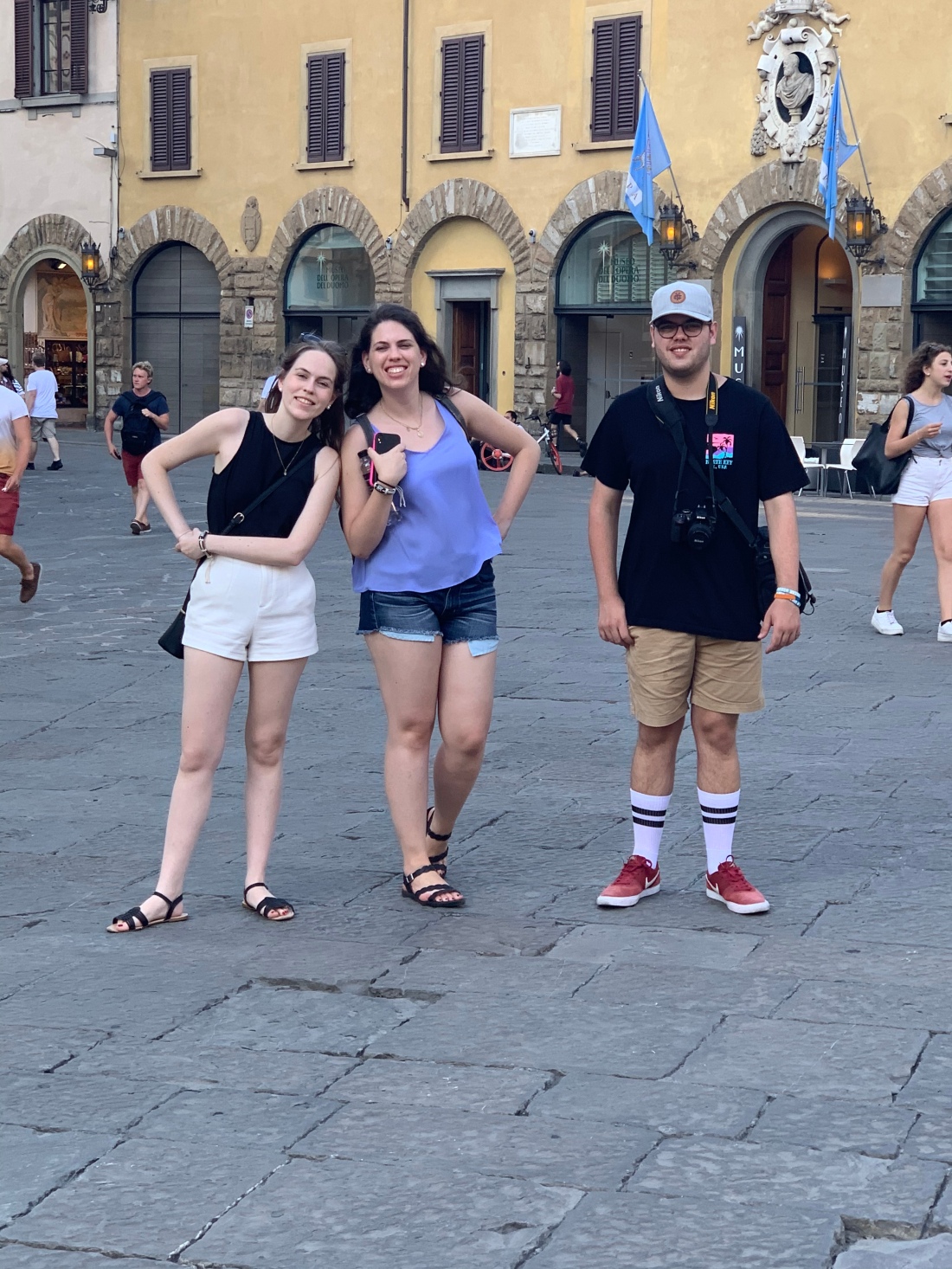 Florence is such a magical place! Both Karen and I would love a repeat visit and are sure we could easily occupy ourselves there for between a week and a month 🙂