Day 4 started by a very nice breakfast at the boutique hotel we stayed at. The food was nice and the staff was extremely pleasant. Our take from Italy so far was that based on the breakfasts so far the Italians aren’t grate salad eaters. For breakfast only sliced cucumbers and mini tomatoes were served. 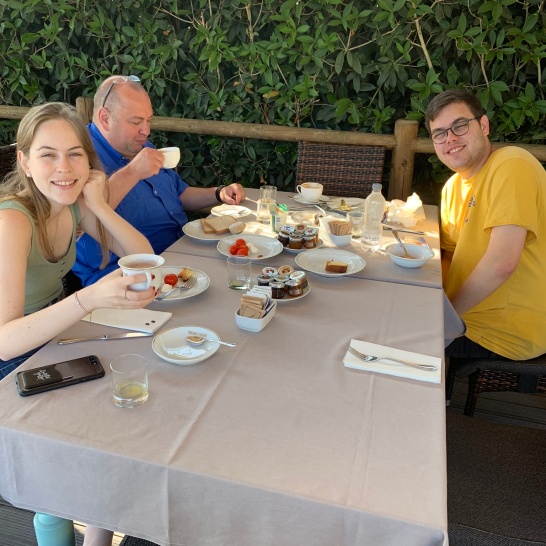 After breakfast we headed to see the famous leaning tower of Verona. Before going to Verona we heard lots of rumors regarding the Italian Limited Traffic Zones (LTZ) which one my enter by mistake and then get a huge fine and as Verona, we knew, had LTZs we drove in extra carefully. Luckily Waze, which we used to navigate in Italy planed our route to the designated parking while avoiding LTZs.

After parking and a short walk we arrived at the site.

As we entered and made our progress through an extremely dense crowd the beautiful site presented itself and I felt I was in a picture… The tower was there, in full glory and indeed leaning as expected. Immediately I remembered Galileo using this same tower to throw spheres of it and to arrive to the conclusion that acceleration does not depend on the object’s mass.  We were at the location this extremely famous experiment took place in 1589!!! Totally Amazing and I was in awe!!! 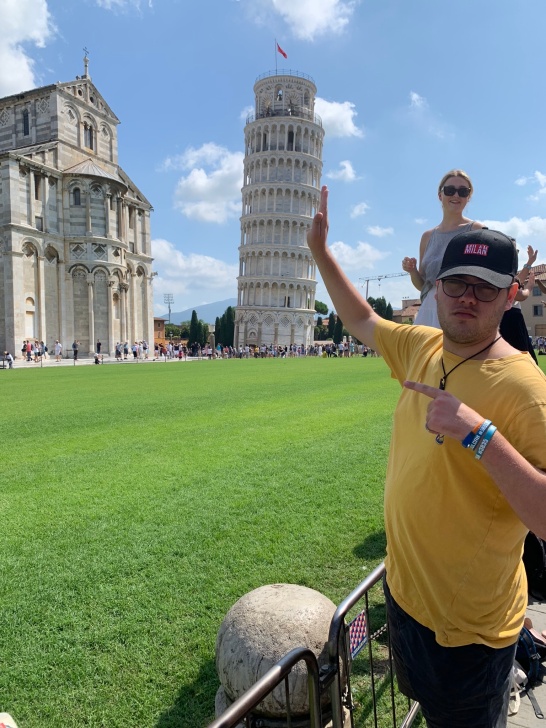 I went off to take closeups of the tower and the site. However, after a while Roni came to look for me and tell me that Karen, somehow had sidestepped and had fallen and is injured. Jonny, took Karen’s fall rather hard as he though of our trip being ruined by Karen’s incapacitation and was upset a bit but relaxed after he saw Karen could walk just fine. Karen got a painful bruise but no significant damage (I’m writing this two weeks after the fact and her bruise is on its way to healing).

After this incident we resumed our walking around the site. While walking I could see the Italians were rather thrifty and were re-purposing older used Roman blocks for the construction of this site as is evident from these shots.

We walked about the site without entering into the various churches and the museum. 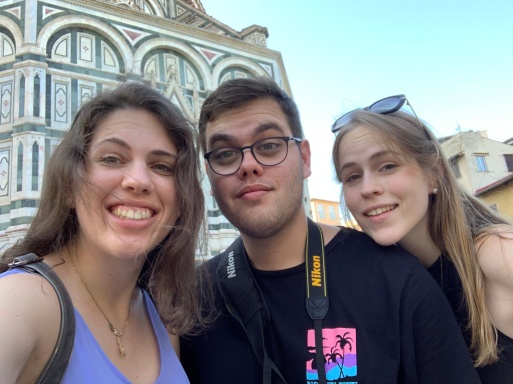 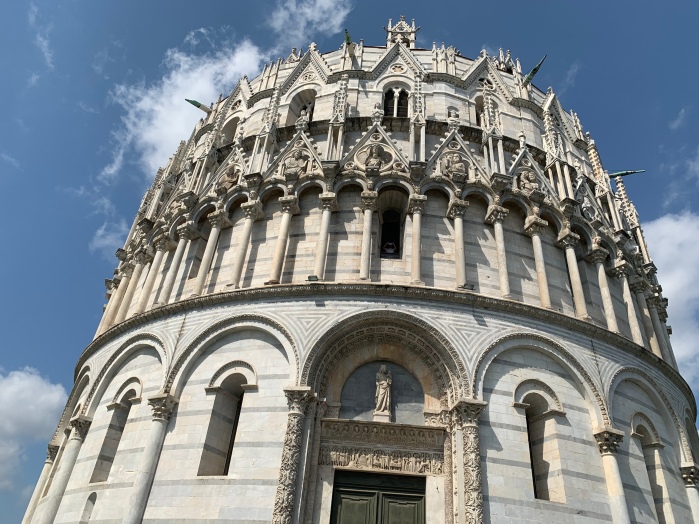 While walking around I observed this strange dial which apparently wasn’t designed to show the time but rather something else. Engraved on its face were the Zodiac signs but not twelve but only 8… The function of this dial remains a mystery to me.

After this awesome site we decided to split. Roni heard a town by the name of Lucca was a nice place and I was recommended to visit the Carrara marble quarry. So each car went its own way.

Karen and I decided to stop at a supermarket to buy some stuff for drinking wine in the evening. I felt as if I’m back home shopping at our regular supermarket 🙂 The shaelf arrangement and layout was, of course, different but overall the atmosphere felt very familiar. Karen insisted we could mange to do a self check out using the automated cashier stands, which look extremely familiar but after a short attempt which ended in the cash register beeping at us and nobody local trying to help us we decided to check out using the “normal way”… 🙂 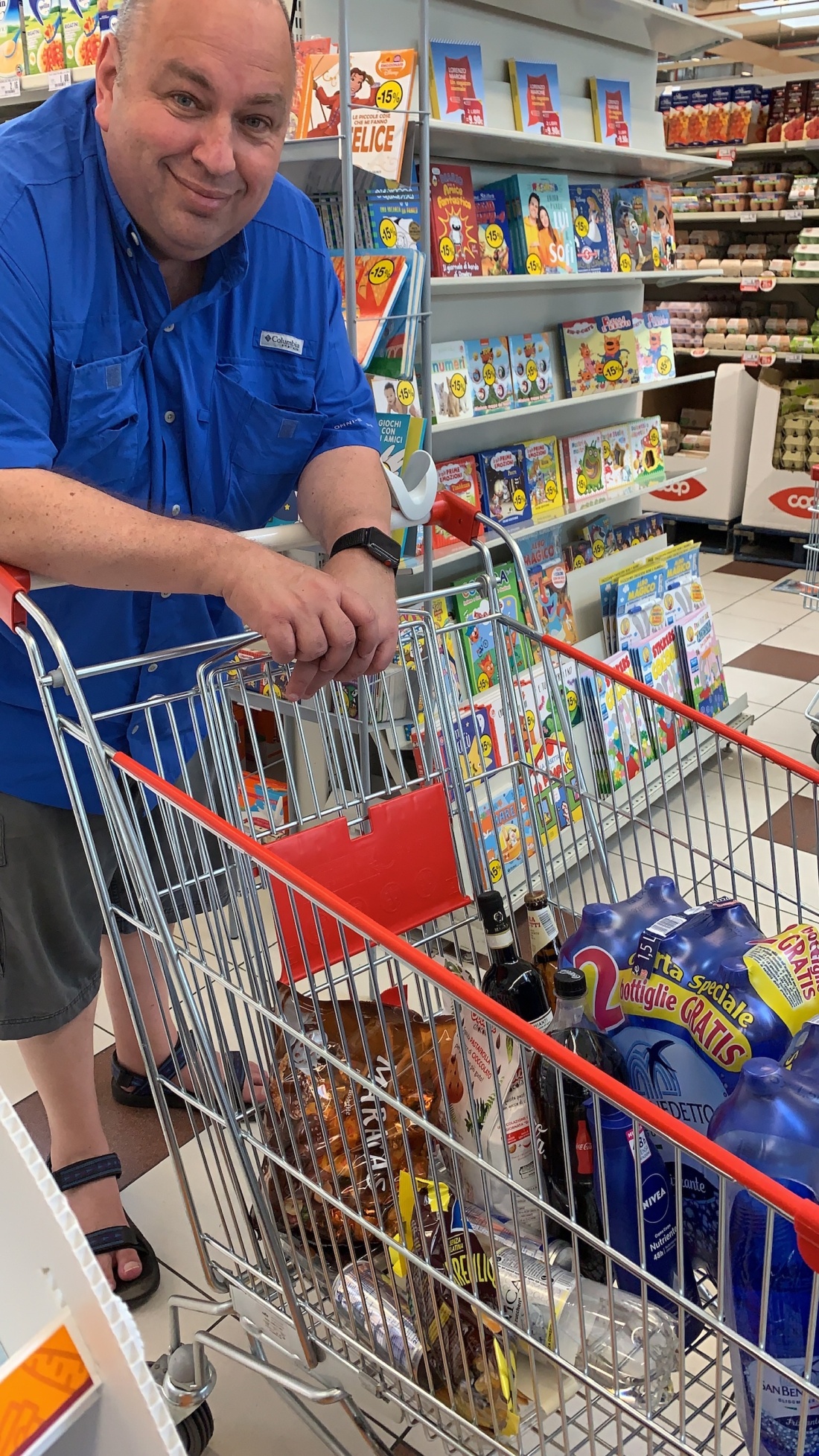 Having finished this we headed to Carrera through the magnificent Tuscany views. 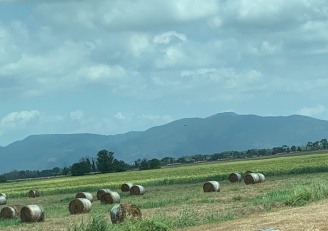 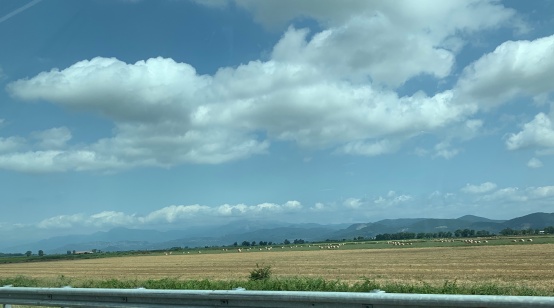 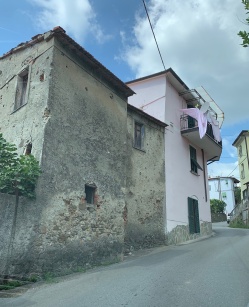 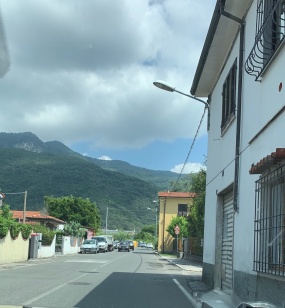 The drive to the quarry took us through Carrera and through a maze of ever narrowing roads and steep uphill drive the whole time. Eventually even Waze “got lost” and stopped giving us instructions. At some point I probably took a right turn instead of left. Karen instructed me to make a U turn and eventually we finished on an extremely narrow road (probably one way although it wasn’t marked as such) and facing an angry truck driver who insisted on passing… 🙂 At that point we decided to forgo the visit to Carrera, read about it on the Internet, and head for lunch.

Karen insisted we should fulfill Jonnie’s dream and eat an Italian authentic lunch in a local restaurant. So she located a food place (if it was in the US I would have called it a diner) nearby. We stopped there and as it was local and authentic the waitress couldn’t utter a word in English 🙂 Eventually and with loots of “Google translate” we managed to order a two course business lunch (for a ridiculously low price) and it was the first time I actually ate Pasta in Italy (going to write a separate blog entry about why I consider Italian Pasta to be huge fraud…).

Here’s a picture of Karen eating some Italian fakery. My plate is visible as well…

Following the disappointment of not seeing the Carrera quarry we headed back to the hotel followed by a dinner in Florence.

As on the previous day we took a shuttle from the hotel, arrived to the old city and went to a stroll through all the, by now, familiar places… out intent was to go for dinner. Or told us that yesterday they’ve found a place which has the highest recommendation on Trip Adviser and we decided to go there. As we didn’t order a place in advance we decide to go to a restaurant near by which also had high ratings on Trip Adviser.

After Jonny and I ate ate nice, juicy, Tuscan stakes and the rest some Italian fakery sunset was setting in and we went for a stroll…

We headed to the river through the by now familiar plaaces… 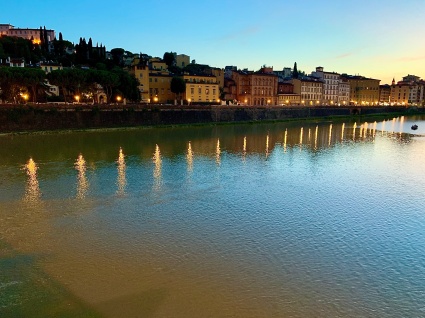 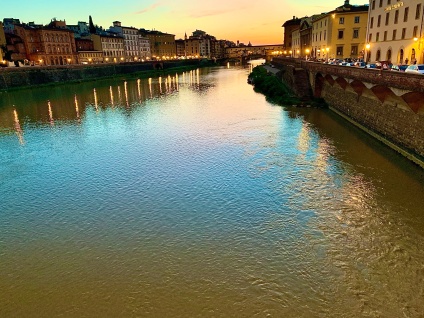 It was absolutely magical!!!

As it was the end of the day and we already missed the shuttle back we needed to find a taxi. I remembered I saw taxis on the previous day next to the Leonardo museum so we decide to walk that way. 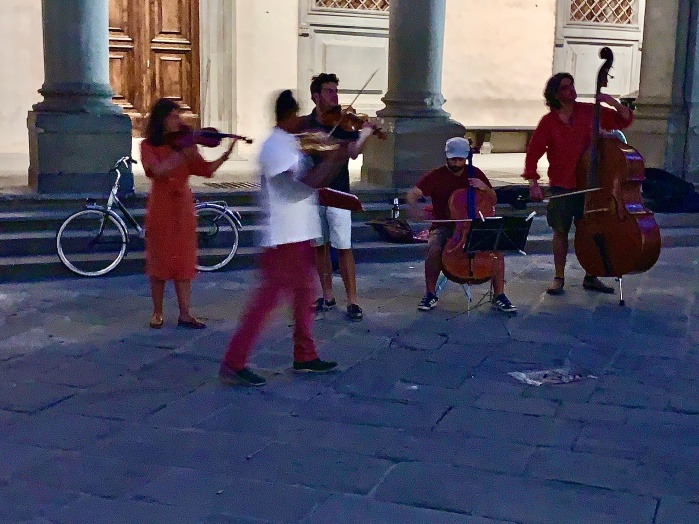 Eventually we found a taxi stop and got picked up by a taxi for six. The driver confirmed everything we heard about Italian drivers… He drove ever so fqast through the city without any stops, neither for pedestrians nor when entering roundabouts. The only stops he made were at red traffic lights 🙂

After a fast ride we got close to the hotel which was in a rural sort of an environment (see day 3) with “streets” wide enough for a single car and with no visibility around the corners. He drove there extremely fast as well. I think some of us felt they were either riding a thrill ride or participating in an escape for a bank heist 🙂

But all is well that ends well. Apparently the guy knew what he was doing 🙂

We had out little wine drinking party on Lee’s porch and hit the beds. We knew tomorrow was a very interesting wine route followed by a long drive to Rome and needed to replenish our stamina 🙂