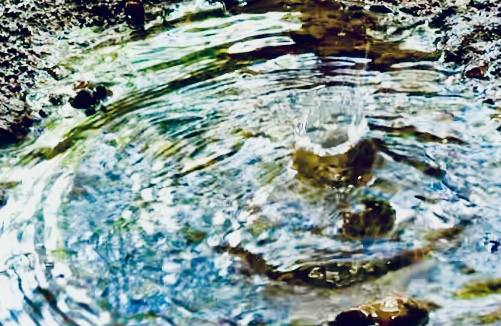 This is an actual water splash dripping into a puddle gathering in our garden. This puddle is caused by the water condensation drain from and active Air Conditioner.

I saw this happening and decided to grab a picture of the exact splash moment. Normally the fulfillment of such a decision would call for some fancy timer and synchronization means. However I had none of the above but was set to take this picture.

So as it is clearly a puddle on the ground you might think I needed to get really low then, while being very stable try to catch this picture hoping I’d be lucky. Well obviously that’s not the avenue I took 🙂

In order to take this low shot and still be stable I used a selfie stick, fully extended. and how do you think I triggered the actual shot you think with the phone dangling next to my feet and far from my hands? Here my Apple watch became handy 🙂

Using the camera app on my Apple Watch i could both review the image and trigger the shot at the precise moment.

And the reason I did not rely on luck for the precise triggering is because what you see is a single frame from a 15 second video taken in a slo-mo mode (200 frames a second). I took some footage containing several splashes, chose the frame most appealing to me, color corrected, enhanced it and presto. A lesson learned and opportunity to improve for next time. After all the puddle is always there 🙂